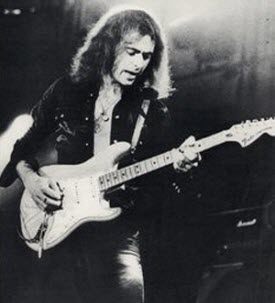 My musical influences run a wide range of musical styles from Rock to Indian Music. I believe there is so much value to be gotten and learned from in so many different diverse musical influences. As a matter of fact, I am still learning from the same musical influences that I’ve had from my earliest days as new student of the guitar. Today I want to share about one of those early guitar heroes.

These days, not many people know the name of the guitar player, but everyone will immediately recognize the song, “Smoke on the Water”. Just about every kid first learning to play guitar will play some version of it. The original guitarist was Ritchie Blackmore who was a founding member of the British band Deep Purple. Although the song is somewhat of a signature song for the band, in my opinion, it was far from their best song or even a good representation of what those musicians were musically capable of doing.

Ritchie Blackmore was one of my very earliest rock influences. I remember very vividly when I was about 12 years old, I first heard his playing on the Deep Purple album, “Machine Head”, being played by a best friend’s older brother while I was visiting their house. I was immediately enthralled with the music and Blackmore’s brilliant guitar playing and also incredible playing by band member and keyboardist, Jon Lord. I asked to borrow the album, which I took no time to record on cassette tape. I wore out that cassette. I began purchasing Deep Purple’s albums through the next 5 or 6 years and worked on many of Blackmore’s songs and solos.

Ritchie Blackmore’s primary electric guitar of choice is the Fender Stratocaster and he man-handled the instrument with incredible technical proficiency. He was very notably influenced by the blues, which came through clearly in his playing, along with a lot of classical-like phrasing. My choice for having picked the Strat as my first “real” guitar was largely based on the musical influence that Ritchie Blackmore had on me, as well as Jimi Hendrix and David Gilmour of Pink Floyd.

Even now, those early tunes played by Ritchie Blackmore and his virtuosic guitar playing still marvels me.