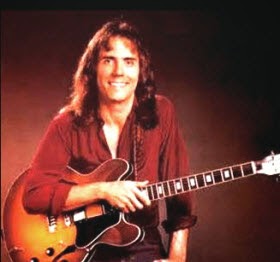 Today I’m featuring the guitar work of Larry Carlton. I’ve had some really great musical heroes in my life that all influenced me and my guitar playing in one way or another. But it was Larry’s powerful sense of melody and harmony that I connected with and has had the strongest impact on how I approach everything musically and instrumentally. It was also his versatility that I really admired.

Larry Carlton was born in Torrance, California on March 2, 1948, and is an American blues/jazz/rock guitarist and composer.

Back in the 70’s, he was a very in-demand LA studio session musician and played some of the most memorable guitar parts on many popular tunes by other artists.

As a session musician, he’s recorded up to five hundred recordings a year, including albums by Steely Dan, Joni Mitchell, Billy Joel, Michael Jackson, Quincy Jones, The Four Tops, Christopher Cross, Barbra Streisand, the Partridge Family, and Charly García’s Clics Modernos. His guitar work on Steely Dan’s “Kid Charlemagne” from their 1976 LP The Royal Scam has been listed as the third best guitar solo on record by Rolling Stone magazine.

He started learning to play guitar when he was six years old studying under a local guitar teacher near his home. Taking an interest in jazz while at high school, his playing style was influenced by guitar greatest: Joe Pass, Wes Montgomery, Barney Kessel, and B.B. King. Saxophonist John Coltrane has also made a notable impression on Carlton, and Carlton’s live albums have featured cuts from Miles Davis’ Kind of Blue.

His guitar solos uses a strong sense of playing close to the chord tones and coloring his lines with a poly-tonal chord stacking approach. All the while, he keeps everything he plays grounded close to a bluesy phrasing which makes his playing so inviting.

Larry Carlton – Room 335 – This was Larry’s first solo album as an artist and it’s a classic.

Friends – This whole album is excellent. Features BB King as a guest on a blues jam, “Blues for BB”.

Sleepwalk – Excellent Larry Carlton playing and features a gorgeous rendition of “Sleepwalk”, the classic by the Ventures.

Christmas At My House – This was always one of my favorite albums to play around the house at Christmas time. Beautiful Jazzy renditions of Christmas songs. Bring a little bit of musical elegance into your Holiday season with this one!

Grammy-winner Larry Carlton puts his talent to work for you in two areas of specialization in this Instructional DVD.: Blues and Chord Substitution. The Blues section deals with imitation, theme development, extended phrasing, banding techniques, vibrato and solo construction. In the Chord Substitution section, Larry explains his trademark triad approach, starting with basic chord substitution and leading to extended triad-on-triad usage. This is Larry’s exciting fusion sound, spelled-out, clarified and made accessible to any guitarist. CLICK HERE

Another great resource of learning material from Larry Carlton. Discover the answers to the ‘most asked questions’ about how Larry Carlton, one of today’s most influential jazz/rock guitarists, achieves his soulful and memorable style in this revealing 45-minute session in this Instructional DVD. Larry presents an in-depth look at how to solo and improvise jazz, blues and be-bop variations with keyboard accompaniment provided by Terry Trotter. CLICK HERE