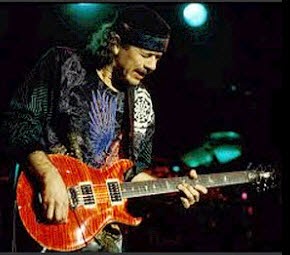 Santana is one of my earliest musical influences. I was exposed to his music during a visit at my Dad’s apartment as a kid when I was first learning to play guitar. His emotion-filled melodic guitar solos helped me to develop my own style and pushed me to explore the role of scales and fusing my emotions into my music.

Carlos Santana (born 1947) is a Mexican/American rock guitar legend who became famous in the late ’60s and early ’70s with his band, Santana, which pioneered rock, Latin music and jazz fusion. He always surrounds himself with a powerfully big and full rock band sound. This is one of the things that attracted me most to his music, it was always bigger than life! The band’s sound featured his melodic, blues-based guitar lines set against rich, driving Latin and African rhythms, featuring percussion instruments not generally heard in rock music. The heavily percussive instrumentation with keyboard rich harmonic textures was Santana’s trade-mark and he continued to work in these forms over the following decades. He experienced a resurgence of popularity and critical acclaim in the late 1990s and is still actively putting out albums and touring today.

Santana had a whole string of well-known songs that still gets airplay. Some of the popular tunes from Santana’s huge catalog of music were:

The great thing about Santana’s music is that it crosses over different genres, cultures and has had wide acceptance among audiences in different age groups as well.

Santana’s playing style draws heavily from the scale modes (Aeolian, Ionian, Dorian & Mixolydian) and the Harmonic Minor scale mixed heavily with the Blues scale, giving his solos a rock edge with a Latino blend. His effects used are mostly smoothly over-driven tone, reverb and some wah-wah.

When I was a kid learning the guitar, I’d sit in front of my stereo and learn many of Santana’s songs and guitar solos off of the vinyl albums by ear. Those riffs were an invaluable source of material to incorporate in my developing style. Any guitar player would benefit learning some of the melodic phrasing used by Santana.