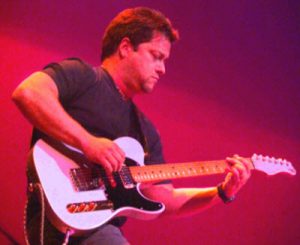 I had a lot of guitar heroes since first picking up the guitar as a pre-teen. One of my most recent heroes is Nashville session guitarist, Brent Mason, who I’ve learned about from a drummer friend of mine a few years ago. Thanks to the magic of Youtube, I got to see what this guy was all about and I was amazed. He is actually a combination of many of my favorite guitar players all wrapped up in one person.

Although his name is well known in Country Music circles, Brent, in reality, is a virtuoso musician who is at home playing jazz, classical, Latin, swing, blues, rock and funk styles. He cites some of his main influences as Jerry Reed, Lenny Breau, Pat Martino, Roy Nichols, George Benson, Jeff Beck and Larry Carlton. You can definitely hear those influences in his playing. He was also inspired in his teens by a more obscure guitarist named Carlos Rios after he heard him on a Gino Vanelli album released in the mid 70’s, entitled “Brother to Brother”, which I also had loved from hearing him on that same album.

Seeing the incredible versatility of this accomplished guitar player, Brent Mason is one of the most recorded guitarists in history. As well as being a Grammy Award winning artist he is also 14 times winner of the Academy of Country Music, the CMA (being nominated every year since 1991), a NAMMIE winner and for many years has won the annual Music City Allstars Award (the musician that has played on most songs on the radio in respect of the top ten for the entire year).

Playing a Jazz gig with his brother, drummer Randy Mason.

Brent was born in 1959 and raised in the city of Van Wert, Ohio. Born into a musical family, he taught himself to play guitar at five years old. He has never had a music lesson and learned how to play ‘by ear’ learning songs and licks from his favorite guitar heroes the same way myself and our generation did… from vinyl albums. Amazingly, his technique consists of using a thumb pick and his right hand fingers for most of his playing. He uses acrylic fingernails on his right hand so that when he strikes the string with them, it matches the sound of the thumb pick.

After leaving High School, he started working at a tool box factory. While there he witnessed many co-workers injure their hands, lose fingers and in one case lose their entire hand. The final straw came when he riveted a hole completely through his thumb in the middle of his thumbnail. Brent realized that if he was ever going explore his musical gift fully he had to leave the factory and pursue his dream before he too lost the use of his hands permanently. Brent left for Nashville at the age of 21 with a hole punched completely through his thumb. The rest is history.

This is a complete audio of Brent Mason’s debut album “Hot Wired”, now out of print and a recent copy of it sold for several thousand dollars on Ebay. This album shows Brent’s incredible versatility and soulfully tasty guitar licks. If you appreciate that in a musician, as I do, you’ll most likely listen to this recording several times as I have… and I’m doing right now as I write this blog post. Enjoy!