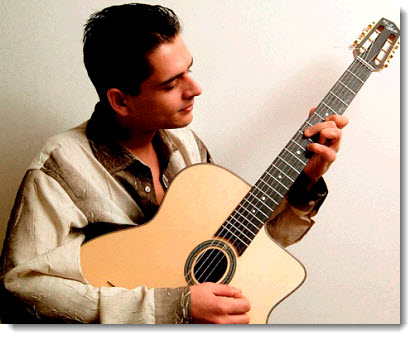 Guitarist, Jimmy Rosenberg has become one of my newest “favorite guitarists” which I had learned about from a Facebook post. I am completely flawed with this young virtuoso’s playing. Joseph “Jimmy” Rosenberg is a Dutch guitarist, known for his virtuoso playing of Gypsy jazz, in the style of the legendary Django Reinhardt, and other jazz-related styles.

Born in 1980, this young gypsy guitarist had already reached “fame” status in Europe before he reached 18 years old. Jimmy Rosenberg’s international reputation started with appearing on British TV on a special show called “Django’s Legacy” in 1990 as a 10-year old with the trio “The Gypsy Kids”. He got a lot of attention because of that broadcast displaying his mastery of the guitar at such a young age. With this group, he toured in Oslo, New York and the Django festival in Paris until he pursued a solo career in 1997. Rosenberg has often taken part in the Norwegian Django Festival in Oslo, his first attendance having been made at only twelve years of age.

In 2000 he made his debut at Carnegie Hall, as part of the Django Reinhardt Festival at Birdland, New York. He has released many records, and has worked together with Norwegians such as Hot Club de Norvège, Ola Kvernberg, and Stian Carstensen. Internationally, he has worked and released records with Romane, Jon Larsen, Andreas Öberg, Bireli Lagrene, Angelo Debarre and Frank Vignola. He has also played with Willie Nelson.

Most of Jimmy’s playing had been on acoustic guitar even though he has explored a little on the electric. His lightning speed on the guitar is astounding. Having a lot of technical speed on the guitar is not unusual, many guitarist mastered that especially back in the 80’s to the point where it became a monotonous display of musical gymnastics without any soul or melodic sense. The difference with Rosenberg’s playing is his incredibly keen sense of melody and his mastery of chords all on the acoustic guitar. His playing is magical and will leave most people (especially guitarists) breathless just listening or watching this young master’s skill.

In 2007 Rosenberg’s life was documented in a Dutch film “The Father, The Son, and the Talent” which was an account of his troubled relationship with his father and his struggles with drugs and emotional issues. Very sad story. He has received high regard by artists such as James Brown, Stevie Wonder and Willie Nelson, including inviting him to play guitar with them.

I believe every guitar player can benefit from listening to Jimmy Rosenberg’s playing as it will serve to “raise the bar” for any aspiring guitarist.