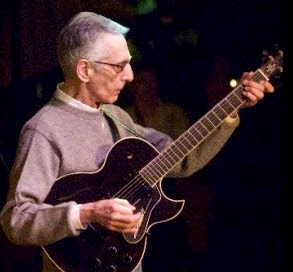 One of my favorite Jazz guitarists is Pat Martino. Martino is an Italian-American jazz guitarist and composer within the post bop, fusion, mainstream jazz, and hard bop idioms. His style and approach to playing is both melodically complex and hypnotically beautiful.

The first time I’ve heard of him was in an article I read in Downbeat magazine in the mid 70’s in my hometown public library when I was in my teens.

Downbeat was a great magazine dedicated to jazz and the education of jazz. It was rich with content about jazz musicians and transcribed jazz tunes. This particular issue had an article that talked about Pat Martino and his new album “Joyous Lake”. It was the first album that he’s done in a jazz fusion concept, something he hadn’t done before.

This particular issue of had a transcription of the guitar solo from “Song Bird”, a cut off the album. I was just so intrigued at the juicy stuff in the transcription as I analyzed it trying to figure out Pat’s approach at improvising. I had to get that album, so I did and I was hooked.

His lines were fluid and mysterious to me. At the time, it struck me that he must be using some mathematical approach to his playing. It’s not a style that is easily imitated or one that I’ve heard before in other players. He has an approach based on long complex lines (he calls “activities”) that are constructed from multiple scale applications, chromatic passing tones as well as improvising over harmonically-related chords (not necessarily diatonically-related).

Pat Martino was born in South Philadelphia. He began playing professionally at age 15 after moving to New York City. Martino caught the ears of jazz lovers and musicians alike as a young man playing guitar in the NY jazz circuit in the 60’s (check out the video below with George Benson talking about his encounter with Martino). Martino played and recorded early in his career with musicians such as Willis Jackson and Eric Kloss. He also worked with many jazz organists, such as Charles Earland, Jack McDuff, Trudy Pitts, Jimmy Smith, Gene Ludwig, Don Patterson, Richard “Groove” Holmes. Throughout the 1960s and 1970s, Martino made many recordings as a sideman and also under his own name.

In 1980, Martino underwent surgery as the result of a near fatal brain aneurysm. The surgery left him with amnesia, leaving him, among other things, without some memory of the guitar and his musical career. With the help of friends, computers, and his old recordings, Martino made a recovery, and learned to play the guitar again.

Pat Martino put out some excellent instructional books and videos out that would worth getting to learn about his style and approach.

I recommend any serious guitarist to get into Pat Martino’s music, it definitely will spark your imagination. His long discography provides a seemingly endless source of inspiration for any guitarist who wants to take a journey into a “quantum physics” approach to Jazz Guitar.