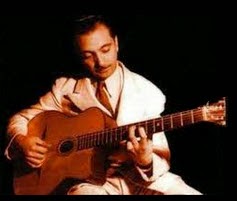 I first heard about Django Reinhardt on my 15th birthday when my mom had gotten me a record album featuring a collection of the greatest jazz guitarists.

Looking at the album, I had recognized some of the names but others I didn’t know. Among the unfamiliar names was Django Reinhardt. As the song came on featuring this guitarist, I was floored with his playing. His fiery technique on the guitar and mastery of beautifully improvised melodies at both slow and breakneck tempos easily put him in my mind as the best of the best.

When I read the biographical notes about him on the album, I was floored again…he only had TWO FINGERS that he used on his fretting hand! There was no way someone could play like that with only two fingers. He was more fluent than most guitar players with all four fingers on the fretboard. Amazing!

What struck me about Django’s playing is how much my guitar teacher at the time, Charlie LaVerne, sounded like him. When I asked Charlie about what he thought about Django, he revealed to me that he was one of his biggest influences and he had gotten to see Django play in person. He said when he watched him play, Django’s two fingers seemed to be running all around the guitar.

Reinhardt lived from 1910 – 1953 and was a Belgian-born guitarist and composer from Romanian descent. He was born into a Gypsy family and lived a Gypsy lifestyle traveling in horse drawn caravans. Reinhardt was attracted to music at an early age, first playing the violin. At the age of 12, he received a banjo-guitar as a gift. He quickly learned to play, mimicking the fingerings of musicians he watched. By age 13, Reinhardt was able to make a living playing music.

At age 18 in 1928, Reinhardt was injured in a fire which ravaged the gypsy caravan he shared with his first wife. They were very poor, and to supplement their income, his wife made imitation flowers out of celluloid and paper. Returning from a performance late one night, Reinhardt apparently knocked over a candle on his way to bed, igniting the imitation flowers which were highly flammable. The whole wagon quickly became ablaze.

While his family and neighbors were quick to pull him to safety, he received first and second-degree burns over half his body. His right leg was paralyzed, and his ring finger and pinky of his left hand were badly burned. Doctors believed that he would never play guitar again and intended to amputate one of his legs. Reinhardt refused to have the surgery and left the hospital after a short time; he was able to walk within a year with the aid of a cane and was able to teach himself to play music again with his remaining two fingers which were still functioned.

After Reinhardt returned to performing he eventually met French Jazz violinist Stéphane Grappelli and together they formed the group, the Hot Club of France Quintet. That group brought Django Reinhardt a great deal of popularity in Europe and a bit in America. They wrote and performed many songs which are still greats among jazz guitar players today. The style of music that they played is often referred to as Gypsy Swing or Gypsy Jazz.

Reinhardt played mostly on an acoustic guitar made by the Selmer Company which was known for it’s volume. He played the electric guitar when he came to the U.S. to join Duke Ellington’s big band for a brief period. He never really enjoyed playing on the electric though and later returned to playing the acoustic guitar.

Jazz guitarists today can benefit from learning the Django Reinhardt’s songs and solos. Particularly how he was able to employ fast, fluent lines into memorable melodies.

Django Reinhardt Anthology – Transcribed and edited by Mike Peters for Guitar in Tab & Musical Notation. Includes 70 Reinhardt classics for classical guitar. Each song lists its date of recording and other important information relating to the song and recording session. The book includes chord names, performance notes, introductory text and black & white photos. This would make a great addition to your collection of music from the greats of Jazz Guitar.

The Best of Django Reinhardt  – A Step-by-Step Breakdown of the Guitar Styles and Techniques of the Jazz Giant, Django Reinhardt. Transcribed for the Guitar includes tablature, standard notation, chord names and guitar chord diagrams, and examples on a CD.  64 pages of great information to help you learn about the style and approach of this Guitar Legend!