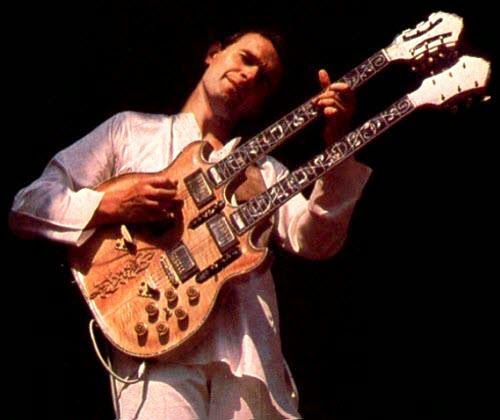 When I first heard John McLaughlin, I was in my early teens learning to play guitar and listening to a number of the well known Rock bands like Led Zeppelin, Cream, Pink Floyd, Black Sabbath, Grand Funk, etc. I was handed a cassette tape from the owner of bicycle store where I was hired to clean up his shop everyday after school.

That cassette tape had two album recordings of John McLaughlin’s band, the Mahavishnu Orchestra. My world was turned upside down by that cassette. When I first heard McLaughlin’s music and guitar work, I didn’t know the things he did were even possible on the guitar. Previously to hearing that tape, I have never heard of him. but I was so mesmerized by that initial introduction on that cassette tape, I was driven to get everything McLaughlin ever recorded.

As a young aspiring musician, I purposely set my personal goals to advance to the point of the people I listened to. Even as lofty of an ideal that was, it had a way of building a forward momentum in my musical development. The bar for my musical development was immediately raised sky-high upon hearing McLaughlin. Like many kids who hang posters of their sports heroes on the walls of their bedroom to get inspired, my walls were covered with pictures of my guitar heroes. Those pictures were motivational to me. Needless to say, there were way more pictures of John McLaughlin concert photos than all of the other guitar heroes that lined the walls of my bedroom. Those pics were constant motivators for me to learn as much as I can and practice my guitar playing harder. 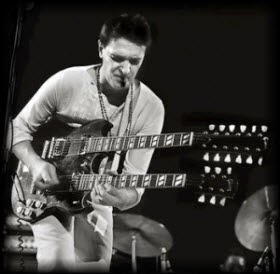 Born in England into a family of musicians (his mother being a concert violinist), McLaughlin studied violin and piano as a child and took up the guitar at the age of 11, exploring styles from flamenco to the jazz of Django Reinhardt and Stéphane Grappelli. During the 1960s he often had to support himself with session work which he didn’t enjoy but which enhanced his playing and sight-reading. At the time, he gave guitar lessons to Jimmy Page, of Led Zeppelin fame.

John McLaughlin is a leading guitarist in jazz and jazz-rock fusion. His style has been described as one of aggressive speed, technical precision, and harmonic sophistication. He’s known for using exotic scales and unconventional time signatures. Indian music has had a profound influence on his style, and, it has been written, he is one of the first westerners to play Indian music to Indian audiences. He was influential in bringing jazz fusion to popularity with Miles Davis, playing with Davis on five of his studio albums and then later on starting his jazz-rock fusion band project called the Mahavishnu Orchestra which brought him wide acclaim. He truly pioneered jazz fusion and brought it to the forefront of the music industry influencing countless musicians, especially guitarists. 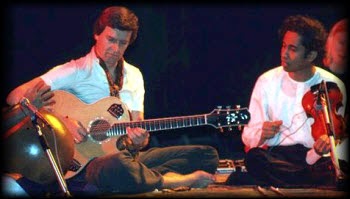 Throughout the years, McLaughlin was to work on many different musical projects: 3 different incarnations of the Mahavishnu Orchestra, the acoustic Shakti group which was a fusion of Indian music and Jazz, the One Truth Band, various solo projects and collaborations with musicians from all around the world.

McLaughlin has been cited as a major influence on many 1970s and 1980s fusion guitarists. Examples are prominent players such as Steve Morse, Eric Johnson, Mike Stern, Al DiMeola and Scott Henderson. According to Pat Metheny, McLaughlin has changed the evolution of the guitar during several of his periods of playing.

McLaughlin is also considered a major influence on composers in the fusion genre. In an interview with Downbeat, Chick Corea remarked that “…what John McLaughlin did with the electric guitar set the world on its ear. No one ever heard an electric guitar played like that before, and it certainly inspired me. John’s band, more than my experience with Miles, led me to want to turn the volume up and write music that was more dramatic and made your hair stand on end”. 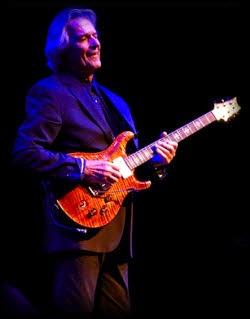 The thing that strikes me about John McLaughlin’s playing and musicianship, is that it never stopped growing and developing. He is truly a student of music and has continually broke new ground through out his musical career.

Like many career musicians, John McLaughlin never seemed to settle in one musical area very long. Through the years, McLaughlin kept pushing the limits of the guitar and his personal musicianship beyond the bounds of mere mortals. That is hugely inspiring and fascinating to me.

There has been many guitar heroes in my life as a guitarist, but John McLaughlin’s music and playing is what lit my fire in those early years of my musical development and brought me to the decision to choose the guitar as a profession.