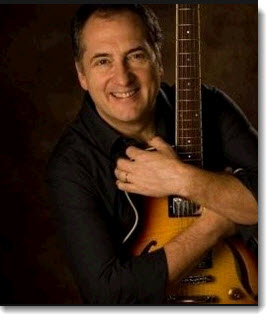 During the ’80’s and ’90’s when smooth jazz was popular and there was no shortage of Smooth Jazz radio stations, one artist really caught my ear, guitarist Chuck Loeb. What captured my attention about his playing was the really strong jazz sensibilities in his playing as well as a command of melody and tone.

At the time there were a number of guitarist from rock as well as traditional jazz who crossed over to smooth jazz since it was receiving quite a bit of commercial success. Interestingly, you can always tell if a guitarist was coming from a rock background or a jazz background. Jazz guitar is more sophisticated style of music melodically as well as harmonically, where rock tends to be more simplistic harmonically. Chuck had it all in his playing but with tons of maturity and finesse.

Truly a wonderful player, Chuck Loeb, born in 1955 in New York, got into playing guitar listening to rock artists Jimi Hendrix, Eric Clapton, Jimmy Page and the Beatles. He got exposed to jazz when he was 16 years old by hearing musicians Wes Montgomery, George Benson, John McLaughlin, and Pat Martino.

Loeb studied under local guitar teachers in his area and later studied under jazz guitar great Jim Hall in New York City. He attended Berklee School of Music in Boston. After leaving school, he started gigging in the New York City-area, playing alongside jazz greats like Chico Hamilton, Ray Barreto and Hubert Laws.

Loeb put out his debut solo album in 1989 and has since recorded 19 solo albums full of his amazing guitar work. He was also featured on other albums as a band member of various groups. One notable group was jazz band Four Play (Bob James on keyboards), Nathan East on bass, and Harvey Mason on drums) which he joined after Larry Carlton left the group. It’s worth mentioning that jazz guitarist Lee Ritenour was an original member of that band.